From PCJ Editor Wayne Senville: As a follow up to Ed McMahon’s article, “Billboards: The Case for Control,” we thought it important to also hear from Scenic America, an organization that focuses — as their President, Mary Tracy, notes below — on “preserving and enhancing the visual character of our nation’s roadways, communities, and countryside.” Note: the photos included below were provided by Scenic America.

See also the response we received from the Outdoor Advertising Association of America.

Wayne Senville: Mary, you’re President of an organization called Scenic America. Can you tell us a little about what Scenic America does?

Mary Tracy: Two years ago, I became the president of Scenic America, an organization that I have been deeply committed to for the past twenty years. It is the only national nonprofit organization dedicated to preserving and enhancing the visual character of our nation’s roadways, communities, and countryside. We accomplish this mission through outreach and advocacy efforts, and with the help of over twenty state and local affiliates.

We are the sole national counterweight to the multi-billion dollar outdoor advertising industry, yet we are mostly a network of volunteer organizations whose financial resources are dwarfed by the industry’s. We focus our efforts where we can be most effective: helping citizens make their voices heard. When the public is allowed to speak, they voice a preference for beauty over blight.

Wayne Senville: I want to ask you a couple of questions about billboards. First of all, aren’t most billboards used by local businesses, and aren’t billboards also important in promoting tourism?

Mary Tracy: According to a fact sheet prepared by the Outdoor Advertising Association of America, the three biggest users of billboards are McDonald’s, Verizon, and AT&T. All of the top 20 billboard users are large corporations, such as Coca-Cola, Anheuser-Busch, and US Cellular, who use billboards simply as a form of “brand reinforcement” among the traveling public. We’ve spoken with many business owners who say they’d prefer not to use billboards at all; they only use them because their competition does. They’ve told us they’d prefer a level playing field where no one is using billboards. 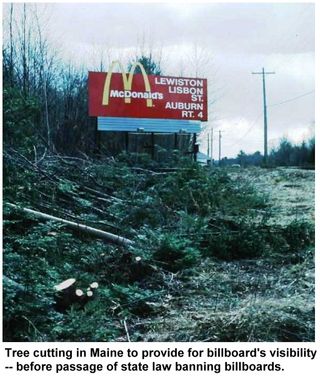 Additionally, the inference that billboards are essential tools for tourism agencies is just plain wrong. The four states that ban billboards all have economies highly dependent on tourism. In fact, tourism spending in Vermont rose 50 percent in the two years after the state removed its last billboard. [Source: “Vermont Travel Estimates Out-of-State Visitors.” 1982. Vermont Division of Research and Statistics]. Celebrating the 30th anniversary of Maine’s billboard ban, Dana Connors, president of the Maine State Chamber of Commerce, said “It’s become part of our quality of place.”

Wayne Senville: If the removal of billboards in these four states has proven to be a success, why haven’t more states joined in banning billboards?

Mary Tracy: Billboard companies and their various trade associations spend millions of dollars annually aggressively lobbying all levels of government, but in particular the industry works to influence regulation at the state level. Part of the reason for this is they receive the least amount of public scrutiny at this level; when called before city councils or local planning commissions to speak on sign ordinances, they are met with a public who is passionately anti-blight and eager to protect their neighborhoods.

Last year the industry was unsuccessful in its attempts to overturn Durham, North Carolina’s longstanding billboard ban and erect digital billboards. Since they lost that fight, they are now working on legislation that will remove local control.

In fact, there is currently a concerted effort by the billboard industry to eliminate local control over sign regulation. Bills have been introduced in four states — Missouri, North Carolina, Florida, and Texas — that would take control of billboards away from localities and give it to the state.

The federal government has also made it difficult for states to remove billboards. Congress has prevented states from using amortization as a tool to remove the thousands of nonconforming billboards along interstate and federal-aid primary highways, instead requiring cash compensation, the funds for which simply no longer exist. 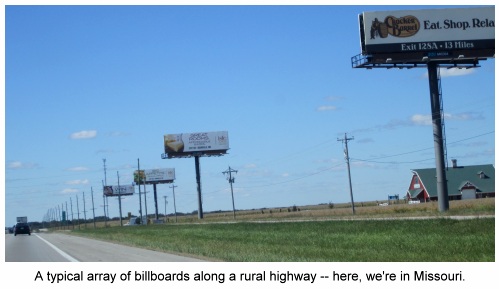 Wayne Senville: Assuming local hands are not tied by state legislation, are there things communities can do to reduce the number of billboards?

Mary Tracy: The first and most important step to reducing sign blight is to prohibit the construction of new billboards, like thousands of communities across the country have already done. This will ultimately result in fewer billboards as some are lost to attrition, some to Mother Nature and others to development. When Houston banned new billboards in 1980, there were some 10,000 signs in the city; today, there are fewer than 3,000.

The industry often cites First Amendment rights but the Courts have held that commercial speech does not enjoy the same protections as personal speech, and the Supreme Court has ruled that governments can regulate and even ban billboards over aesthetic and safety concerns.

Most important of all, it is imperative for people to stand up and make their voices heard. The industry prefers to work in the shadows, out of view of public scrutiny, lobbying in the back halls of state capitals. Citizens should visit our website to see if there is a local affiliate in their area, and if not, they should contact us for help in setting up an advocacy group.

Wayne Senville: We’ve heard on our Linkedin group page from a member of the Outdoor Advertising Association that banning billboards will destroy hundreds of thousands of job in that industry, and will also eliminate lease payments thousands receive from allowing billboards to be allowed on their property. Do you have any response to this?

Mary Tracy: These numbers are highly deceptive and do not reflect how many people are actually employed by the industry. For instance, lobbying for a pro-billboard bill in Georgia recently, the industry said 300,000 jobs were at stake. They arrived at that number by estimating the number of people directly or indirectly employed by businesses that advertise on billboards in the state. Actually, like many industries, the billboard industry is now hugely consolidated, and fewer people are employed by it than ever before.

The majority of billboards in this country are owned by three huge corporations: Lamar, Clear Channel, and CBS Outdoor. To them the future is digital billboards, signs that require very little maintenance once erected; their copy is changed by a computer that could be thousands of miles away. By design, the need for human capital in the billboard industry will only diminish in the future, and the claim of “hundreds of thousands” of jobs being lost is an example of the kind of hyperbole they employ to scare governments away from stronger regulation.

Furthermore, the question exists: to what degree should regulation of industry be influenced by its potential impact on jobs? There are many industries which have been regulated, become nonconforming and even disappeared over time because of concern over public health and well being. When given a choice, people prefer to live in clean environments, and as the Supreme Court has stated, that includes not just the air we breathe and water we drink, but also what we see and hear in our public spaces.

Wayne Senville: As you alluded, increasing attention is being focused on digital billboards. The Outdoor Advertising Association of America, in their response to Ed McMahon’s article, says that digital billboards are “only a small portion” of all billboards. Does Scenic America have concerns about them?

Mary Tracy: Yes, while that might be true right now — and remember there are over half a million billboards along our nation’s highways — digital billboards, which electronically change messages every six or eight seconds, have emerged as the leading edge of the outdoor advertising industry’s growth. 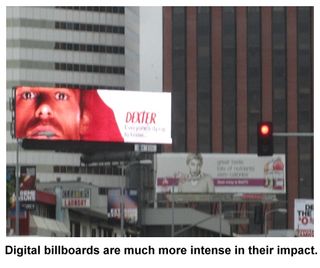 Wayne Senville: What about the energy use of the electronic billboards? Aren’t the LED diodes used in digital signs more environmentally friendly?

Mary Tracy: If traditional billboards continue to be replaced by LED signs, the growing draw of energy from the grid could negate efforts of utility companies to reduce demand during peak times. A single diode uses between 2 and 10 watts depending on the brightness setting — and it needs to be brightest during daylight hours. One digital sign can contain well over 10,000 diodes. A traditional static billboard uses no energy during the day and only two to four halogen bulbs at night. An LED sign can use as much energy as 30 average homes! Take a look at a recently published report on the energy use and environmental impact of digital signs.