400 years after Dutch explorers first set eyes on Hoboken Cove, a team of Dutch architects and engineers have a hand in planning Hoboken, New Jersey’s future.

It may be serendipitous that 400 years after Dutch explorers first set eyes on Hoboken Cove, a team of Dutch architects and engineers have a hand in planning Hoboken, New Jersey’s future.

The efforts to develop the city’s response to climate change and rising sea levels in the wake of Hurricane Sandy are seeing input from the Dutch design firm OMA — as part of the HUD-sponsored Rebuild By Design competition (more on this later).

Hoboken is a compact blue-collar city of 50,000 people. It is characterized by blocks of brownstones and riverfront high-rises, packed into just under 1.75 square miles directly across the Hudson River from Manhattan.

Like the string of communities that form the west bank of the Hudson River, Hoboken is, in essence, a thin strip of land wedged between a river and a tidal marshland. More than two-thirds of the city’s land area — home to 53% of its residents — is less than five feet above mean sea level. With limited pervious surface area upstream and an aging combined sewer system, flooding in Hoboken from periodic storm events is already a common experience. But this will significantly worsen as sea levels are projected to approach the five foot mark by the end of the century, leading to growing exposure to storm surges, exacerbated by upstream rain events.

On October 29, 2012, when Hurricane Sandy crossed the New Jersey shore at high tide, Hoboken was presented with a preview to its future. The 14-foot storm surge breached the riverbank through the Long Slip Canal to the south and Weehawken Cove to the north, immersing emergency generators and flood pumps.

With 500 million gallons of floodwater and pumps disabled, the city’s combined sanitary storm sewers backed up, filling over half the city with a toxic brew, and knocking out electrical power to over 90% of its residents for days.

In addition to property damage estimated at $100 million, enormous business losses, and another $100 million in damages to the PATH transit system, the storm exposed the city’s vulnerability to rising sea levels. For Hoboken residents, over half of whom rely on public transit, the loss of PATH trains to Manhattan for three months was especially challenging.

Hurricane Sandy was a shock to Hoboken. In response, the City’s planners moved quickly to prepare a Resiliency and Readiness Plan.

Hurricane Sandy was a shock to Hoboken. In response, the City’s planners moved quickly to prepare a Resiliency and Readiness Plan, unveiled in August of 2013, less than a year after Sandy. The Plan identified strategies to address storm surge and flooding as well as potential funding sources:

In addition to Hoboken’s own planning efforts, the City has participated in the novel Rebuild by Design competition — a competition that is leading to creative long-term strategies for a number of cities in the New York City metropolitan area facing the threat of storms and rising sea levels.

Organized by the U.S. Department of Housing & Urban Development in the fall of 2013 as part of the Hurricane Sandy Rebuilding Task Force, Rebuild by Design is supported by, among others, The Rockefeller Foundation and the Regional Plan Association. Henk Ovink, Senior Advisor to HUD Secretary Shaun Donovan, has led the program.

Rebuild By Design is not setting out to solve a regional problem with a single solution.

As Ovink and Eric Klinenberg (Research Director for Rebuild by Design) explain, “Resilient design cannot be a one-size-fits-all approach. Taking this into account, Rebuild By Design is not setting out to solve a regional problem with a single solution — changing a city’s building code or engineering a ‘superdam.’ Instead, it will be a dynamic, adaptive process, at the end of which will emerge a catalog of designs that address specific challenges and that can be implemented across the region.” 4

Ten design teams were selected from over 148 international applicants in a unique multi-stage format that invited the selected teams to collaboratively research over 40 potential project sites and proposals. The 40 possible projects were then narrowed down to ten. In the next phase, HUD paired each of the ten teams with one of the ten projects — one of which focused on Hoboken — to develop concept plans, drawing on input from experts, government officials, and the public). All ten concepts were exhibited in April.

Ovink and Klinenberg note that “the process itself is an act of design that establishes a new model for innovation, generating a large set of promising ideas that the region could draw upon in this and other rebuilding initiatives.” 5

HUD announced the selection of the six winning proposals earlier this month. They include Hoboken’s entry, “Resist, Delay, Store, Discharge.” 6 The City was paired with a team led by OMA, a Dutch design firm with New York offices, working with Royal HaskoningDHV, Balmori Associates, and HR&A Advisors. As Stephen Marks, Assistant Business Administrator for the City of Hoboken, told me, the Rebuild By Design proposal represents a unique collaborative effort fully supported by the City. 7 Residents and city staff worked with the OMA design team in multiple public meetings and work sessions.

The OMA plan, which builds on work the City had already done, sets out four principal strategies:

The plan proposes to create a landscaped flood barrier and hardening of the waterfront to protect the city from inundation. At Weehawken Cove to the north, a park landscape will serve as a defensive wall, protecting Hoboken, Weehawken, and critical regional utilities from storm surge. Wetlands will provide a natural filter, mitigating potential sewer overflow.

Within the city of Hoboken, green infrastructure — increased open space, permeable paving and the previously mentioned rain gardens — will slow the flow of water and reduce flash flooding.

Short video on winning proposal for Hoboken: Resist, Delay, Store, Discharge. Note: there is no sound with the video, but you’ll still get a good overview. Additional Rebuild by Design videos are available on the Vimeo web site (most with narration.

Along Hoboken’s south and west edges, around the transit lines, rainwater storage as part of a “green infrastructure will also create a visually attractive community asset. Additional pumps will also be installed and incorporated into new development along the waterfront.

As Ron Hine, Executive Director of the Fund for a Better Waterfront, (20-year old non-profit that advocates for waterfront improvements along the New Jersey side of the Hudson River), summed up, “the OMA proposal included good fundamental strategies, “doing all of the right things.” 8

As far as implementation of the plan, Mayor Dawn Zimmer has stated, “There is no timeline yet,” but hopes the riverside park and levee system can be completed in the next several years. 10 http://www.nj.com/jjournal-news/index.ssf/2014/06/innovative_plan_aims_to_preven.html The $230 million in federal funding won’t pay for all of the city’s plan as it is also intended to provide flood protection in Weehawken and northern Jersey City.

Hoboken will receive $230 million from HUD for implementation of the “Resist, Delay, Store, Discharge” project, which the City hopes will spur additional public and private investment in the community. The grants for Hoboken are part of a $900 million commitment by HUD to fund the six winning proposals.

The Dutch may not be the sole source of expertise in dealing with water and community, but they may offer lessons for us in governance. In his presentation at the New York Center for Architecture on April 22 this year, Henk Ovink referred to almost 800 years of Dutch technical and governance experience that can serve as a touchstone for sustainable efforts moving forward.

Recognizing that one man’s solution may be creating another man’s problem, the Dutch have developed a system of “water boards” as a primary governance structure addressing flooding and water. The water boards transcend and function independently of all other local and regional jurisdictions. The patience and long-term perspective in recovering and sustaining land from the North Sea can serve as a model as we grapple with the enormous costs and technical challenges of sea level rise and climate change. 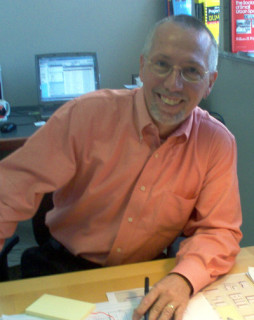 James ‘JR’ Ronczy is a licensed architect with over 30 years of experience in housing, urban design, mixed-use and transit-oriented development across the country.