Twenty-five local officials, planners, and urban designers from across the U.S. and Canada (and even Brazil), in groups of six or seven, headed downstairs and out the front door of our meeting room in the SoHo section of lower Manhattan. 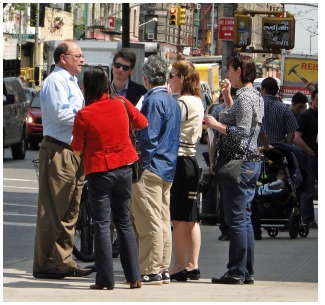 Guided by staff from the Project for Public Spaces (PPS), we would be circling the square — Petrosino Square, that is — two blocks away.

With walking audit sheets in our hands, our job was to spend an hour carefully observing activities in the square and noting what we saw. Each group had a different sector to focus on. The goal of walking audits like this is to get a feel for what works and what doesn’t, and to come up with ideas for strengthening the place. 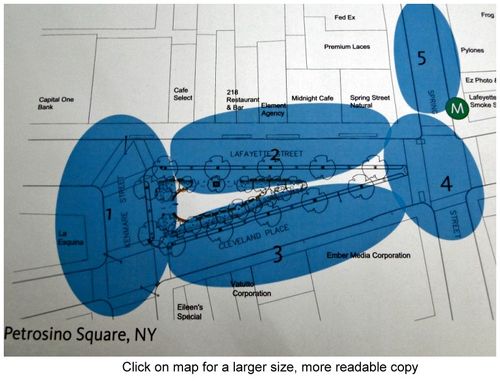 While Petrosino Square was the focal point, much of the audit hones in on how the public open space relates to traffic circulation patterns and to surrounding businesses and land uses. 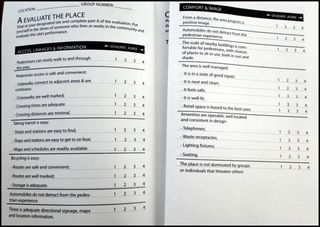 Take a look at a portion of the audit sheet. Click on the image to view it at larger, readable size.

One important point PPS staff mentioned to our group as we headed out: the first five or six minutes of observing are especially important. That’s the time when we get our initial feel for the space we’re viewing.

I used the word “feel” deliberately, because we were advised during this initial period to simply absorb the sights, sounds, and even smells, of the area. This advice reminded me of what I had once heard about listening to music — just to allow your first hearing of a piece of music to flow through you, without over analyzing it. 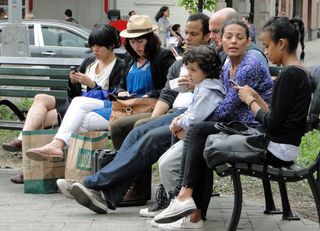 Also important to a walking audit (even to our somewhat condensed audit) is taking some time to ask questions of people using the public space or walking nearby, to gain insights from them.

My group was assigned to observe Spring Street, a narrow, but busy street that intersects the northern end of Petrosino Square [See number 5 in the map above]. We found Spring Street lined with retail stores, restaurants, and an assortment of other businesses. 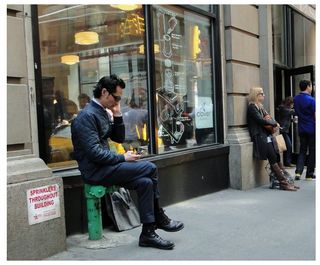 Its’ sidewalks hosted a hodge-podge of “street furnishings” such as trash cans and mail boxes, as well as a diverse assortment of signs plastered on light poles.

Also on this one short block: a subway entrance, some unexpected places to sit (as on a fire hydrant), and plenty of graffiti.

Plus a row of parked delivery trucks, two street vendors, and lots and lots of people coursing (yes, “coursing,” not “cursing”) their way down the block. 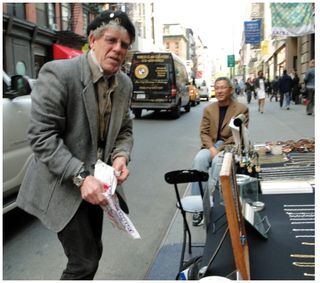 In a moment of inspiration (perhaps), I decided to ask several people if there was a park nearby where I could find a place to sit. I thought that might be too obvious a question, as Petrosino Square was just a block away, but of the six people I asked (including both street vendors) no one had any idea. One of the vendors was helpful, however, pulling out his street map and trying to locate a nearby park — without any luck!

Petrosino Square itself has a long, triangular shape, with the narrow end being closest to Spring Street, where my group walked. During our early afternoon, weekday visit Petrosino Square was quite busy, with many of the bench spots taken. 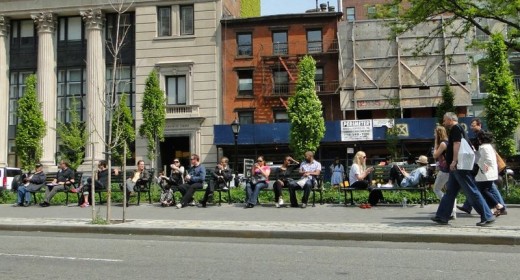 Restaurants bordering the square along Lafayette and Kenmare Streets were also doing well. 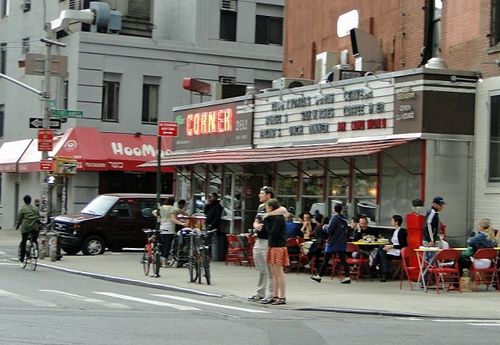 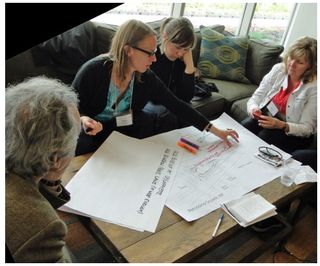 Back upstairs in the meeting room we reconvened. Each group sat down to go over audit sheet notes and compare observations.

It was interesting, to see what things different people picked up on. Lots of pieces of information and details were shared. Most significantly, we spent time discussing how Petrosino Square seemed to work for those using the park, and for surrounding businesses. 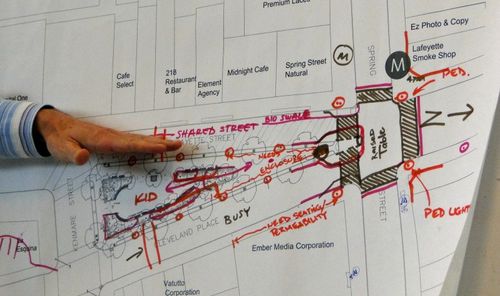 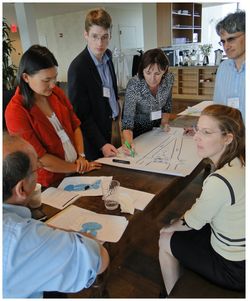 We also try to view the square through the eyes of pedestrians (which we were for a short time). For example, several argued that it might make sense to close or narrow one of the streets bordering the square. This could allow for a much wider sidewalk, and also provide an attractive space for restaurants to place outdoor seating and better connect to the square.

During our discussions, most everyone also felt that Petrosino Square — despite the work that has gone into improving it over the past few years (which included adding new pavement, benches, and trees) — still lacked a strong sense of identity. Perhaps this explains, at least in part, why none of the six people I questioned while walking a block away had been aware of the park.

Petrosino Park, as it is now officially called (it used to be Kenmare Square), is named after a true New York City hero, Lieutenant Joseph Petrosino, the city’s first Italian-American sergeant of detectives — of the Homicide Division. 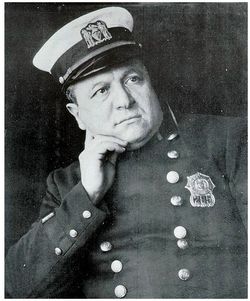 Petrosino gained fame for warning the Secret Service in 1901 about an assassination plot to take the life of President William McKinley, a warning that unfortunately went unheeded. Ironically, Petrosino himself was assassinated in 1909 in Italy while on an undercover assignment investigating the background of organized crime leaders. Some 250,000 New Yorkers lined the streets of Manhattan for his funeral procession. For more about Lt. Petrosino.

PPS staff prodded us to think about how we might initiate changes to Petrosino Square, and what groups we might try to involve. For PPS, building constituencies to support more actively used public spaces is critically important. 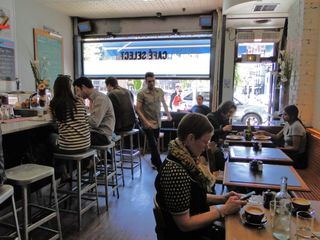 One big selling point — especially to retail businesses bordering the public open space — is how attracting more people will increase their business and, for owners, the value of their property. This is something I’ll come back to in the coming week in postings about Greeley Square and Bryant Park.

Moving cars quickly down the streets bordering the square doesn’t help much in generating business. In fact, it likely has the opposite effect. On the other hand, attracting more pedestrians and bicyclists to the square and its’ surroundings would be a boon.

Words often repeated by PPS staff during the workshop — and I jotted them down — were “active,” “pedestrian-oriented,” “street life,” “sidewalks,” “outdoor eating,” and “fun.” Don’t dismiss “fun” — people like to be in a place they can enjoy being in. It sounds so obvious. Yet how can you enjoy being in a place where autos and trucks constantly stream by? 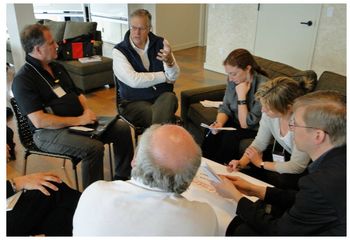 To Fred Kent, President of PPS, it’s also important to think outside the box, or in our case, outside the square. As he stressed, a small square like Petrosino can be much more than just a row of park benches with a couple of trees. It can be the heart of a neighborhood, the generator of activity, a place where people enjoy spending their time, socializing, eating, relaxing, and watching other people also enjoying themselves.

Petrosino Square’s already heading in that direction. It just needs a little more of a push. In the meantime, there’s much to enjoy in circling the square on a sunny afternoon.