People are moving back downtown — and they want grocery stores in their neighborhoods.

But there are many obstacles to getting them back downtown. Among them: 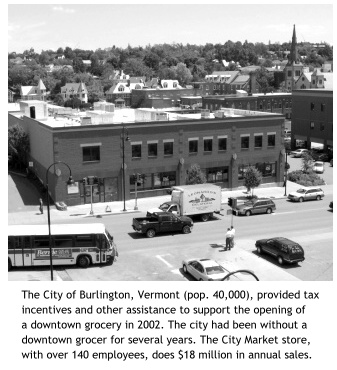 In spite of these obstacles, a growing number of communities are succeeding in attracting national grocers. In 1998, for example, a group of citizens in Washington, DC’s 14th and U Streets neighborhood went door-to-door asking neighborhood residents where they shop for groceries, how much they would spend in a neighborhood grocery store if one were available, what their level of commitment would be to supporting a neighborhood grocery, and their demographic characteristics. This information helped persuade Whole Foods Market to open a store in their neighborhood.

If you’re interested in bringing a national grocery store chain into your downtown, it pays to be well-prepared before making contact. The grocer will want to know as much as possible about: the demographic characteristics of the district; available space; zoning restrictions; and the size and location of potential competitors. Even if all your answers are exactly what the grocer wants to hear, it will probably still be skeptical of opening a downtown store. Your planning commission’s positive attitude — along with assurances of support from other city leaders — will go far towards making the grocery company feel more comfortable.

… article continues with suggestions on how to attract grocers to downtown locations.