On a recent visit to Buffalo, New York, I was impressed by the vibrancy of Elmwood Village, the historic neighborhood surrounding Elmwood and Delaware avenues. It is a walkable, mixed-use neighborhood popular with young people and characterized by Queen Anne–style houses, small apartment buildings, and 300-plus small local shops, restaurants, coffeehouses, bars, and art galleries.

In 2007, Elmwood Village was named one of the top ten great places in America by the American Planning Association. 1

What makes Elmwood Village particularly impressive is its energetic street life and obvious economic vitality — particularly in contrast to downtown Buffalo, which, despite having much larger buildings and far more public investment, seemed relatively lifeless.

Historic preservationists have long argued that older structures play a crucial role in contributing to the livability of cities and the health of local economies. Most preservationists are familiar with Jane Jacobs’s book The Death and Life of Great American Cities, in which she argues that large-scale demolition and replacement of older, smaller buildings with large new structures drains the life and vitality from urban neighborhoods.

But the world has changed a lot since Jacobs penned her thesis. What role do older neighborhoods and smaller buildings play in 21st century cities? 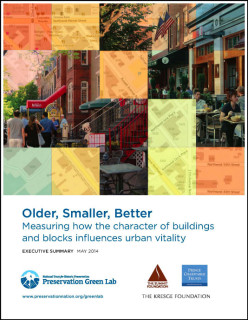 According to a study recently released by the National Trust for Historic Preservation’s Preservation Green Lab, “older buildings draw more shops, restaurants, entertainment venues, [and] small businesses owned by women and minorities and jobs” than newer neighborhoods. The study, “Older, Smaller, Better: Measuring How the Character of Buildings and Blocks Influences Urban Vitality,” 2 found that “on a per-square-foot basis, small-building corridors have a larger concentration of jobs, businesses, and creative-sector employment than downtown skyscrapers.”

In Seattle, they found that historic neighborhoods like Capitol Hill and the International District, with smaller, more age-diverse buildings, have 36.8 percent more jobs per square foot than areas in Seattle that have newer, larger buildings.

In Washington, D.C., they found that older neighborhoods like Barracks Row and H Street, N.E., draw many more nonchain local businesses than other neighborhoods that have a predominance of newer, larger buildings.

And in San Francisco, they found that older neighborhoods like Mid-Market generate more jobs in small business, which is the fastest-growing sector of the U.S. economy.

The research team, in addition to the National Trust’s Preservation Green Lab, included the following: Impresa Inc., a Portland, Oregon based consulting firm specializing in metropolitan economies and knowledge-based industries; Gehl Studio, a Gehl Architects company with offices in New York and San Francisco; and Basemap, a data science and visualization consultancy focused on mapping data in a human context and matching indicators to action.

The research team empirically documented the age, the diversity of age, and the size of buildings in each of the three cities and then statistically assessed the relationships among these characteristics and 40 economic, social, cultural, and environmental performance metrics.

According to the report, research was carried out in six steps:

1. Researchers gathered data from city, county, state, and federal departments and agencies and publicly accessible websites. They looked for data that would help them measure “urban vitality”– meaning the regular social, cultural, and economic activity that occurs in an area of the city. These data ranged from counts of jobs and businesses, to walkability metrics, to measures of population density and diversity.

2. Researchers imposed a 656-by 656-foot (200 by 200 m) grid over a map of each city. Each grid square was a little smaller than two city blocks. Dividing each city into equally sized grid squares allowed for an “apples to apples” comparison of areas throughout the city.

3. Researchers matched and fitted the collected data to the grid squares. Since the data were linked to specific geographic locations ranging from individual property parcel numbers to census blocks, researchers had to make some adjustments to align statistics to their grid.

4. Researchers excluded grid squares that were not in mixed-use and commercial areas. This was because including strictly residential areas would have made it difficult to achieve meaningful comparisons between distinctly different land use types.

5. Researchers developed a composite “character score” that combined three specific building characteristics — building age, diversity of building age, and granularity (i.e., the number of buildings per block) — into a single measure or score.

6. Researchers ran statistical models to test the relationships between the character score of each grid square and 40 urban vitality measures. For example, a high character score was found to correlate with a higher-than-average number of nonchain businesses.

So what does the study tell us about how cities work? The Preservation Green Lab’s report provides the most complete empirical validation to date of Jacobs’s long respected but largely untested hypothesis that neighborhoods containing a mix of older, smaller buildings of diverse age support higher levels of economic and social activity than areas dominated by newer, larger buildings. In a nutshell, the study suggests that diversity breeds vitality.

While results differed slightly from city to city and from neighborhood to neighborhood, the overall study supports the following conclusions:

Nightlife is most alive on streets with a diverse range of building ages. For example, areas with older, smaller buildings had more sidewalk seating permits, greater cellphone use at night, and more businesses still open at 10 p.m. on Fridays.

The creative economy thrives in older, mixed-use neighborhoods. In Seattle and Washington, D.C., smaller, older buildings house greater concentrations of creative jobs per square foot of commercial space. Media production, software publishers, and performing-arts companies can be found in areas that have a smaller-scaled historic fabric.

These findings correlate with those of urban planner Joseph Minicozzi who has done a series of studies on “The Smart Math of Mixed-Use Development.” 3 For example, in an analysis of Asheville, North Carolina, he found that a typical acre of mixed uses in downtown yields $360,000 more in tax revenue to the city government than one acre of strip malls or big-box stores.

Furthermore, the small, historic mixed-use building generated far more jobs and residents per acre than the Walmart — which had no residents and generated only 5.9 jobs per acre (14.5 per ha) versus 73.7 per acre (182 per ha) for the mixed-use project.

Mixed-use and commercial districts made up of small buildings from different eras not only are charming, but they also play an important role in fostering social, economic, and cultural vitality. The report documents how these areas serve as thriving incubators for small businesses, as centers for neighborhood services, and as regional destinations for restaurants, nightlife, and specialty retail.

We need to make it easier to adaptively reuse older buildings and think more about how to fit old and new together at a human scale.

These are important findings because many communities are still fighting to conserve historic neighborhoods in the face of misconceptions about the value of older, smaller buildings. These communities’ efforts are also hampered by outdated zoning regulations, overly prescriptive building and energy codes, misdirected development incentives, and limited financial tools. We need to make it easier to adaptively reuse older buildings and think more about how to fit old and new together at a human scale.

None of this is meant to imply that we don’t need new buildings. Of course we do. But it does demonstrate that smaller, older buildings and blocks “punch above their weight class” when one is considering the full spectrum of outcomes on the per-square-foot basis. Cities need older buildings as well as new ones, and neighborhoods with small-scale historic buildings can be economic and cultural powerhouses when given a chance to survive and evolve.

The report also suggests that the “one-big-thing model of economic development” is often not as cost-effective as supporting the bottom-up revitalization of existing historic neighborhoods like Elmwood Village in Buffalo. Successful urban revitalization is seldom about the one big project. More likely, it is about a lot of little projects that work together synergistically to create a place where people want to be.

This article was originally published in Urban Land (July/August 2014), and is posted here with permission.

The End of the Strip?

To access more than two dozen other articles by Ed McMahon on PlannersWeb, go to our Taking a Closer Look page and scroll down the page — then also continue to Older Posts.