Most Americans now want to live in a walkable neighborhood where they can walk to shops and restaurants and parks, and many are willing to give up a large yard to do so. There is also a strong interest in having access to public transportation. These are among the major findings of the 2013 Community Preference Survey undertaken by the National Association of Realtors.

The survey was completed in September 2013 via the internet by 1,500 adults chosen to be representative of the U.S. population. Margin of error is 2.5%.

The number one feature that people said there was too little of was “Safe routes for riding bikes to work and shopping.”

First, people were asked to evaluate the place they live now by identifying whether they had too little, the right amount, or too much of particular attributes or amenities. The number one feature that people said there was too little of was “Safe routes for riding bikes to work and shopping.” The other top answers for what there was too little of in their neighborhoods was “Public transportation within an easy walk;” “Housing for people with low incomes;” and “Shops or restaurants within an easy walk of your home.” 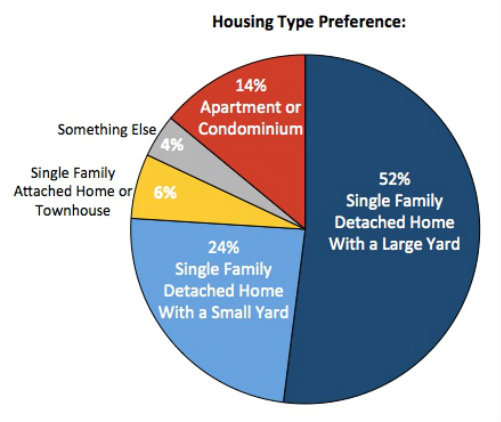 The remainder preferred an attached house or townhome (6%); an apartment or condominium (14%); or some other type of home such as a mobile home (4%).

But note that 44% (those preferring a house with a small yard, plus those preferring an attached house, townhouse, or apartment) — a substantial portion of the total — indicated an interest in housing environments that are more conducive to walkable neighborhoods and communities. This is reinforced by the results discussed next.

A series of questions asked people to consider trade-offs in yard size, commuting time, and the walkability of a neighborhood. [Click on the graphic to view it in a pop up window at larger size.]

In another question, people were asked to choose between Community A and Community B, and for each choice a thorough description was presented that delineated the difference between a conventional automobile-oriented suburban subdivision versus a walkable community.

The descriptions of the two communities are shown in graphic below, along with the resulting data. It should be noted that the terms “walkable community” and “conventional suburb” were not shown to the survey-takers but are shown here for ease of discussion. [Click on the graphic to view it in a pop up window at larger size.]

The result of this comparison is that by a 5 point margin, the respondents preferred the walkable, mixed-use community with public transportation.

The survey also included a series of questions about transportation and traffic. When asked to choose the best long-term answer (among three presented) to reducing traffic and improving transportation in their state, more people named improving public transportation (41%) and developing more communities where people don’t need to drive long distances to work or shop (29%) than chose building new roads (20%). And yet, when presented with the statement “For me, car is king. Nothing will replace my car as my main mode of transportation,” 57% agreed with that statement.

Are there significant generational differences in these preferences?

The survey suggests that there are. We compared the data for those under age 40 versus those over age 50. Younger Americans expressed as a high priority providing transportation alternatives (walking, biking, and public transportation) by a margin of 13 percent points more than older Americans. Younger Americans also rated as a high priority revitalizing cities — by a margin of 10 points more than older Americans. And to the statement “Car is king; nothing will replace my car as my main mode of transportation,” 64% of those over age 50 agreed with this statement, while only 51% of those under age 40 agreed with it.

What messages can we take from this survey?

The survey confirms what we are seeing in many housing markets across the country: that there is a strong demand for homes in walkable neighborhoods. A walkable neighborhood is safe and comfortable for pedestrians (sidewalks are a must!) and there must be places people can walk to, such as parks, recreation facilities, shops, and restaurants. There is also a strong demand for being near public transportation, which is consistent with recent data showing that transit ridership is at a 50-year high.

Most striking in the survey is that the preference for a mixed-use walkable neighborhood is strongest for those who are in the real estate market now. And the higher preference among those under age 40 for walkable communities, revitalizing cities, and alternative transportation tells us the high importance these community traits will have with the consumers of tomorrow.

Policy makers today — planning commissioners and elected officials as well — should consider these trends when they prepare community plans and update their zoning ordinances.

One thing to look at particularly: do your development regulations and transportation plans allow for single-family homes on small lots, in a pedestrian-friendly atmosphere within walking distance of shops, restaurants, and community facilities? This seems to be the “sweet spot” that consumers increasingly want, but in many communities this option is hard to find. 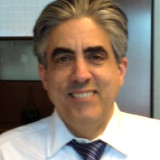 For the complete survey results, go to
http://www.realtor.org/articles/nar-2013-community-preference-survey

Also by Joseph Molinaro from the Planning Commissioners Journal: