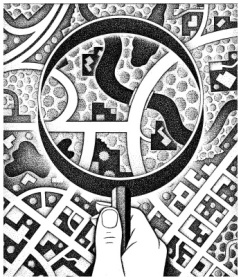 Negative consequences evolved from wider suburban streets, the worst being ever increasing vehicle speeds — triggering attempts like speed bumps to slow cars down.

Many communities are now debating decreasing neighborhood street width. Planning commissioners need to understand the positive and negative aspects of each side of the debate. How narrow is too narrow — and how wide is too wide?

Today and tomorrow, we’ll look at some of the issues in neighborhood street widths, including information from recent research that has addressed the subject of safety.

The discussion of street width often centers around two issues – accessibility and safety.

Accessibility is a measure of how efficiently you can drive through a neighborhood.

Safety is whether traffic and vehicle speed poses a risk to pedestrians.

In discussions of neighborhood street width, each of these issues is typically addressed. Surprisingly, accessibility is often given more consideration than safety.

Some standards do stand out as reasonable minimums. For emergency access, 20 feet is commonly accepted as a minimum width for two way traffic. In addition, eight feet is necessary for on street parking. Therefore, 28 feet is a widely accepted minimum curb face to curb face neighborhood street width.

If 28 feet is a minimum, what is a workable minimum street width that balances accessibility and safety? The illustration below shows three commonly used neighborhood street standards, 29, 35, and 39 feet curb face to curb face. Generally right-of-way widths (which would include sidewalks and the green space between the sidewalk and the curb) for these would be 50, 55, and 60 feet, respectively.

The illustration also shows the distance between vehicles for the three typical street widths. The average width of a vehicle is six feet. 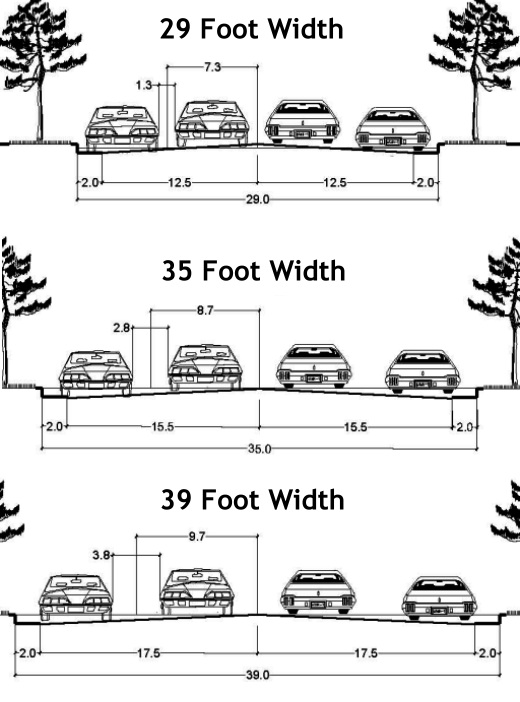 The 35 foot street proportional spacing is 8.7 feet, a distance of 2.8 feet or 33.6 inches between vehicles.

In the street debate, significant importance is given to the daily trip in and out of neighborhoods. Many drivers see the accessibility of driving unconstrained through their neighborhood as being very important. This (along with concerns about access of fire fighting equipment) has driven the movement in the past toward wider neighborhood streets. In contrast, within a narrow street neighborhood, drivers must slow or stop to allow opposing traffic to pass because of vehicles parked on the street.

Tomorrow in Part Two – Street Width & Safety. We will examine studies that measure the relationship between street width, increased speeds, and the impact of speed on the severity of pedestrian injuries from traffic accidents. 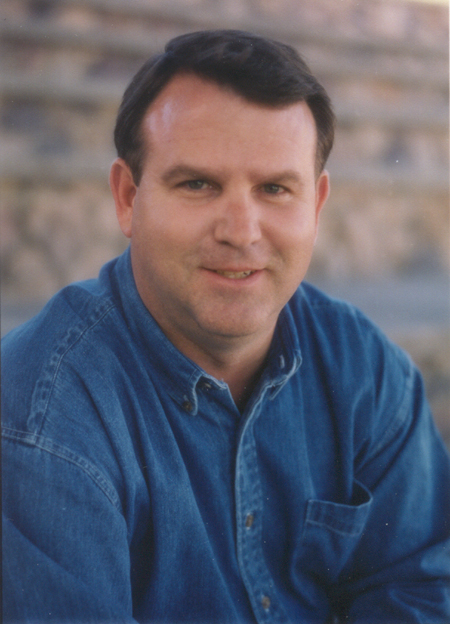 Related articles / postings:
What Do We Mean By “Safe”?