Short answer: nothing. I’m a die-hard Twitter / Facebook / LinkedIn user. I know some people have ambivalent relationships with this stuff. Not me. A day without checking my Twitter feed feels like a visit to the Dark Ages. Just like when I started using email years ago — I simply cannot imagine life without it anymore.

But as your commission, your department, or your local government start using social media tools more and more, it’s essential to look at these with a clear, un-awed eye … and realize that the tools we need to do our work well require much more than just a Facebook page.

Social media platforms are tools. They’re good for many uses, but each platform has significant limitations — there are tasks that they simply cannot do well. It’s like driving a nail with a tape measure. It’s the wrong tool for the job.

One of the uses for which standard social media platforms are often the wrong tool is facilitating broad and meaningful public engagement in complex, messy situations. I’ve written elsewhere about how public meetings that consist of members of the public coming up to a microphone to give their comments are not  effective ways of enabling constructive engagement.

The open format of a social media platform is basically just a bigger microphone. And if the human tendency to either dominate the floor or hide in the corner often ruins our ability to get anything worthwhile out of a public meeting, how much benefit can we realistically expect from the wide-open platform of a Facebook page or a Twitter stream?

The Mayor of Cincinnati, Mark Mallory, maintains a Facebook page. He and his staff use it to post information, announcements, pictures of local events, and so on. A few months ago Mayor Mallory  posted a picture of a very significant groundbreaking — the start of a streetcar line in Downtown Cincinnati. A very big deal, and a huge accomplishment for his administration. But it’s an accomplishment that (like many accomplishments) has vehement opponents. 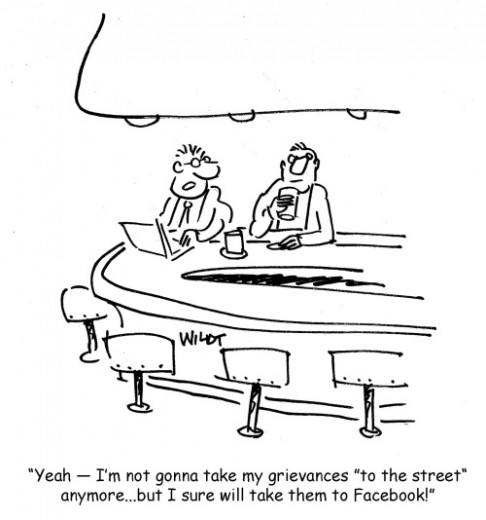 So what happened when he posted this happy picture?

A quick succession of bitter comments rehashing the opposition to the streetcar effort. Which, not surprisingly, then generated equally nasty comments from trolley supporters (who are also equally vehement).

For about six hours, the level of vitriol in the comments on that picture crept toward nuclear detonation. Then someone from the Mayor’s office apparently noticed what was going on and pulled the plug, but not before a lot of people had jacked up their blood pressure by a few notches. And not before another small but sad chapter was added to Cincinnati’s struggles to have a rational discussion about an important issue.

The second example — my favorite band in the universe did a livestream broadcast of a concert a few nights ago to launch a new album. People like me from all over the world were jumping up and down in front of their computer waiting for it to start. The company sponsoring the livestream also had a Twitter stream scrolling across the bottom of the web page, and tweets from viewers gushed in from all over the world.

About three songs in, the internet feed cut out entirely. Apparently a bad storm was wreaking havoc on the transmission. But the Twitter feed at the bottom of the screen kept running … and the comments that started appearing about the sponsoring company were not exactly what anyone would want associated with their name!

I don’t think there’s any question that social media is here to stay and will substantially rewire the way we communicate, the way we find and connect to other people, and the way we learn about the world and ourselves. But if what we want to foster is a constructive, collaborative conversation that moves our community forward in a meaningful way, we have to become much more sophisticated than simply sending out Tweets or putting up photos on a Facebook page.

Meaningful conversations require effort to make and keep them reasonable — and we know from our public meeting experience and from our own lives that we as humans don’t always put in this effort unless we have to.

When we do public engagement, we need to actively facilitate the process — we have to enable the  conversation to go where we need it to go. We need to support the people who are sincerely trying to be part of the solution and channel the conversation away from those more simplistic or less sincere tendencies that often scuttle our best intentions. It’s our job to set the process up for success, not just leave the results to chance.

We can do this, and we can choose from a wide assortment of online tools to help us do that. But we have to make the conscious effort. We have to do much more than stick a microphone in the middle of the room, even if that microphone is called “social media.”