In our Winter 2011 planner and PCJ contributing writer Beth Humstone, in “Building Invisible Walls,” reports on the use of urban growth boundaries (or “UGBs” as they’re often called).

I asked Humstone to take a few minutes to respond to some questions I had about some of the points she makes in her article:

One of the concerns I’ve heard about growth boundaries is that they increase housing costs within areas inside the boundary because the supply of developable land is constrained. Is this true? — and what ways are there to prevent this from happening, or to minimize the impacts?

Housing prices need not rise with urban growth boundaries, particularly where there has been adequate planning for growth. While land values may increase by constraining the supply of land available for development, higher densities may keep housing prices stable or even lower them. That’s what Arthur C. Nelson and Casey J. Dawkins found in their 2004 report for the American Planning Association (Urban Containment in the United States, Planning Advisory Service Report 520).

To avoid raising housing prices, it is very important that the area within the growth boundary is sufficient to meet population growth for a reasonable time period, usually 20 years. The amount of land needed will be determined primarily by zoning densities and the supply of undeveloped or underdeveloped land that is appropriate for housing. In addition, some factor should be applied that takes into account that not all land needed for development will be available for this purpose within the twenty year time frame.

Because market demand and the availability of land for development are difficult to precisely project, it is important to monitor growth rates, housing and land prices, and densities of development within the growth boundaries over time. If prices rise to unacceptable levels, there are several options: increase the boundary to increase the land supply; increase densities and/or institute minimum densities; or adopt inclusionary zoning.

In your article you point to municipal public service cost savings from having urban growth boundaries. Can you explain why that’s the case? 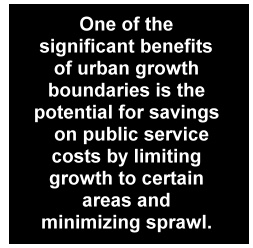 One of the significant benefits of urban growth boundaries is the potential for savings on public service costs by limiting growth to certain areas and minimizing sprawl.

By confining growth to a designated area, costly water and sewer line extensions and new roads can be avoided — provided the bounded area is compact and limits are placed on public services outside the growth boundary. In addition, police patrols, emergency services, and school bus transportation may be more efficiently delivered within confined growth areas.

As Reid Ewing notes, per capita costs for public infrastructure almost certainly fall as density rises. Communities and regions should still be mindful of the public costs of repair, maintenance, and reinvestment in infrastructure within urban growth boundaries.

Is there evidence that growth boundaries actually reduce sprawl and help preserve farmland?

Population forecasts indicate how much growth an area can expect in the future. This growth can take place in a sprawled out pattern or in one or more compactly developed areas. If most of the growth occurs within an urban growth boundary, one can assume that there will be less sprawl and less impact on farmland.  However, if there are only minimal constraints on growth outside the growth boundary, there is no guarantee that sprawl, or loss of farmland will be avoided.

Open space resources outside of urban growth boundaries obtain the best protection through land acquisition or permanent conservation easements. Zoning that restricts uses to agriculture or forestry can be effective, but is subject to change over time. Mandatory clustering combined with large lot zoning can keep the development allowed to a minimum and make sure it happens off of important resource land.

One example that illustrates the potential for UGBs to protect farmland is in the Willamette Valley in Oregon. According to 1,000 Friends of Oregon, a non profit organization that advocates for Oregon’s land use laws:

“Of the 2 million acres in farm zones in the Willamette Valley, only 4,070 acres, or 2/10 of 1%, was lost between 1987 and 1999, either by being added to urban growth boundaries or by being rezoned from farm use to rural development. During the same period, the population of the Valley increased by nearly 23%, to 2,268,200. (For comparison purposes, California’s Central Valley is losing 15,000 acres of farmland every year.) The establishment of the planning program meant that over 300,000 acres in the Willamette Valley were rezoned in 1973 from rural homesites to agriculture.”

Do Growth Boundaries Need to Be Regionally-Based?

Are growth boundaries possible if you don’t have a strong metropolitan or regional form of government? 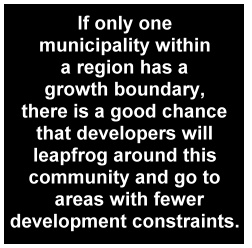 Growth boundaries can be applied within a municipality, or on a regional or county scale. While they certainly can work within one community, they are probably most effective if applied regionally. If only one municipality within a region has a growth boundary, there is a good chance that developers will leapfrog around this community and go to areas with fewer development constraints.

In the case of Boulder, Colorado, Boulder City established urban growth boundaries. As Boulder County — outside the city — began to experience dramatic development pressures, measures had to be taken in both the city and the county to manage growth.  The Boulder City–Boulder County case illustrates that if a city is highly restrictive, the growth will go elsewhere causing problems in other jurisdictions. As I note in my article, there’s a good report available online about what happened in Boulder.

In your PCJ article you mention Vermont’s fairly recent “growth centers” law. People in most parts of the U.S. probably have an image of Vermont as a bucolic state, a good place to ski or vacation. So what led to State of Vermont to enact growth centers legislation?

Like most places in the United States, Vermont has had to confront the issue of sprawl. There is strip development along highways outside of its urban centers and rural sprawl scattered across its landscape. For nearly fifty years, Vermonters have voiced their concern with sprawl and continue to express their preference for growing in a way that reinforces historic downtowns and village centers and preserves the working landscape.

In 2002 an unusual alliance of realtors, home builders, developers, smart growth advocates, environmentalists, and historic preservationists promoted a major expansion to a program that designated and supported downtowns and village centers. Members of this loose coalition then participated in the development of legislation establishing the Vermont Growth Centers Program in 2006. 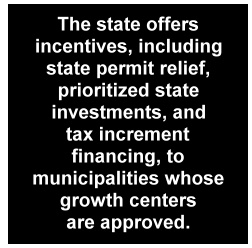 Under the Vermont Growth Centers program, municipalities (county government is weak in Vermont) establish a boundary within which a majority of growth over the next twenty years will occur and seek approval from the state for designation of this area as a “growth center.” The state offers incentives, including state permit relief, prioritized state investments, and tax increment financing, to municipalities whose growth centers are approved.

The growth center area must be compact, mixed use, and contain public buildings, facilities, and services. In no case can a growth center adversely impact an existing downtown or village center (and most approved growth centers to date include downtowns). Applicants must demonstrate that the growth center will develop in a compact pattern meeting smart growth principles and that they have effective measures in place to protect land outside the boundary.

To date, six growth centers in Vermont have been designated. Changes in 2010 to the growth centers law were enacted to address concerns with implementation of the original legislation and strengthen the mandate to support existing downtowns and village centers and ensure that twenty years of growth are carefully planned and that development will be compact and mixed use.

Do you see any major differences in how a predominantly rural state like Vermont can best deal with growth compared to a more urban state?

Growth centers in Vermont differ from urban growth boundaries in other parts of the country because they are small and focused on a designated center of a community — a downtown, a village, or a new town center (The largest city in Vermont, Burlington, has a population of only about 40,000). Growth is intended to be contiguous to the center and support its primary role as the social, economic, and institutional heart of the community.  This approach is fitting for a state with 23 designated downtowns and over 100 designated village centers and a desire to preserve prime agricultural and forest land and other natural resources in between.