Dan Zack, the Downtown Coordinator for Redwood City, California, has put together a quite interesting photo quiz on the density of various residential buildings — primarily in Redwood City and Palo Alto. It’s the type of quiz you might want to try in your own city or region. See if there are lessons you can draw from Zack’s 11-minute long presentation. At the very least, you’ll get a tour of parts of these two communities (with a few stops elsewhere).

I emailed Dan Zack and asked him what reaction he’s received to the density quiz. Here’s his reply:

I’m really happy to say that the presentation has changed the conversation among the people who have seen it. One of my main goals was to reset people’s density “scale.” I’ve seen people protest a project that was only 4 units per acre as being too dense. Sorry, but that’s not dense. I’ll show you dense! Also, it has given the people who have seen it a clear understanding that ugly might be low in density, and really attractive stuff might be unbelievably dense. Likewise, they understand that tall doesn’t necessarily equal dense.

Zack also went on to provide four very useful tips if you’re interested in putting together a similar density quiz for your community:

1. Try to use as many local examples as possible. This diffuses the “sure it works in (insert any city other than your own here), but we are sooooo different and it won’t work for us” argument.

2. Don’t be afraid to show REALLY dense projects in the quiz. Give people a sense of the actual spectrum of density that exists out there. If you limit the high end of your spectrum to 30 du/ac because you’re afraid of freaking people out, then later when a nice townhouse project just off of the Main Street comes in at 40 du/ac, it will look psychotically dense to them. In reality, 40 du/ac is pretty moderate, when you look at the range of things on the ground in our country. So if your quiz includes a few nice projects that are over 100 or 200 (or 300) du/ac, then 40 can be seen for what it really is: not too radical, and possibly just right depending on the situation.

3. Stick with net du/ac figures. That is how projects are measured for zoning/development application purposes, and that is what is on public hearing notices that people will receive, so that is what they need to understand. Don’t muddy the waters by mixing gross du/ac or persons per square mile figures into our quiz. 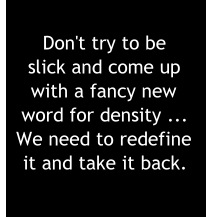 4. Don’t try to be slick and come up with a fancy new word for density. That dang word is in every zoning ordinance in the country, and we can’t get away from it. We need to redefine it and take it back, rather than hiding from it and calling it something like “compactness.” People figure it out pretty quickly when you’re hiding something, and then they won’t trust you. Deal with it head on, and clear away the myths and misconceptions.

PCJ Editor’s Note: for more on dealing with density concerns, see Beth Humstone’s PCJ article, “Getting the Density You Want.”