If you walk through most North American cities you’ll find yourself on that very familiar grid of streets — usually intersecting at 90 degree angles. Indeed, until landscape architect Frederick Law Olmsted popularized the more curvilinear pattern of streets in suburban Riverside, Illinois in 1868 (below right), the grid pattern dominated our suburbs as well. 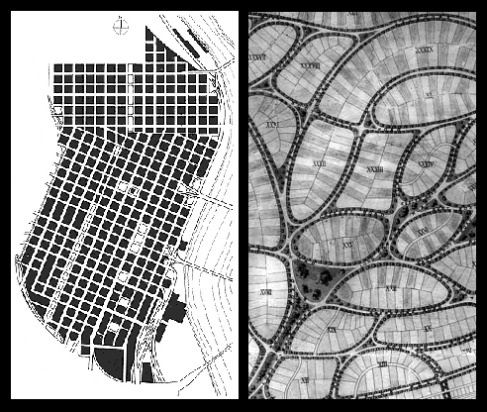 But did you ever think about where the grid street pattern originated? If you want to find out, take a look at an informative blog posting, “A Brief History of Grid Plans, Ancient to Renaissance,” by Laurence Aurbach, on the Ped Shed web site.

Aurbach traces the origins of grid streets back to the Indus Valley:

“By 2600 BC, Mohenjo-daro in the Indus Valley (present-day Pakistan) was built with blocks divided by a grid of straight streets, laid out in perfect right angles, running north-south and east-west. Each block was subdivided by small lanes. Mohenjo-Daro was the largest of many grid-plan towns and villages that existed in the region from 2600-1900 BC. Obeserving the urban planning of the Indus Valley civilization, archeologist B. B. Lal wrote, ‘Well-regulated streets [were] oriented almost invariably along with the cardinal directions, thus forming a grid-iron pattern.'”

“By and large, ancient grid plans were expressions of military organization, colonial conquest, or political/economic domination. Grids were most often used when there was a large amount of territory to occupy in a short time. They were also used to establish formal order and spatial focus on particular functions of urban life — civic, religious, governmental, etc.”

For a detailed look back at the history of urban streets, see also “A Brief History of Urban Form, Street Layout Through the Ages,” by J. H. Crawford, posted on Carfree.com. Crawford is ultimately highly critical of grid patterns, arguing that “straight lines and repetitive shapes, the hallmark of centralized planning, are ultimately dull and unsatisfactory.”