Comments by Ted Shekell on Commercial Development Near Residential

Editor’s Introduction: I met Ted Shekell during my 2007 cross-country travels on Route 50. While visiting O’Fallon, I actually sat in on a planning commission meeting involving the Creekside project Ted discusses below. My O’Fallon posts are available at: A Small Town State of Mind | The Creekside Development | Introductions

Wendy Grey’s article “Bringing Commercial Uses Closer to Existing Residential Neighborhoods” is very well done and highlights some of the most critical aspects to gaining approvals for these types of projects. As many planners know, commercial projects located near residential areas often lead to conflict and sometimes quite contentious opposition from the neighbors. If the project is poorly located or poorly designed, then it’s definitely fair game — the developers of such a project should expect an up-hill fight. However, even well located and designed commercial projects can find rough sledding when proposed near residential neighborhoods.

Our City, O’Fallon, Illinois (population approximately 30,000), which is located about 15 miles from St. Louis, Missouri, has seen several such proposals over the 15 years I’ve been planning director, and Wendy’s three key recommendations on what planning departments can do to evaluate them are spot on. As Wendy points out, the more information that can be exchanged with the community, and doing so early in the process, the better a project’s chances of acceptance.

Minimizing the real and perceived negative externalities of a project on a residential area is essential to gaining support from the neighboring residents. Having said that, occasionally even a well-designed project and the most thorough communication with the community can’t overcome negative public reaction. As the old adage goes, “perception is reality,” and managing perceptions as well as expectations is critical. 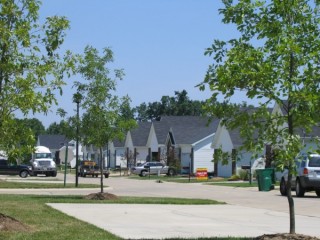 One such case in O’Fallon highlights the challenges of doing commercial developments near single-family residential. Creekside Promenade was a proposed neighborhood commercial center that was to include five separate retail shops comprising a total of about 40,000 square feet, and it was planned to be built at a key intersection centrally located in an all single-family residential area containing about 1,000 homes. This part of the community had historically been planned and developed as single family residential, exclusive of all commercial uses, with the closest retail shop of any kind being about two miles away from the site.

In an effort to provide for small commercial developments to serve these large residential districts, and as part of our 2006 Comprehensive Plan update, we developed a land use category called “Neighborhood Commercial,” which would allow a maximum of 15,000 square feet of neighborhood retail and services at any one of the four corners of a designated intersection, with not more than 40,000 sq. ft. in total permitted at the entirety of the intersection.

The Creekside Promenade intersection was deemed a good location not only because it was centrally located in the middle of a thousand or so single family homes, but because the site was also completely buffered on three sides from the homes by a 300 foot wide tree-covered riparian area. It was a “T” intersection, where the uses planned in each respective “quadrant” were (1) Creekside Promenade, (2) construction of a proposed church, and (3) an active farm which had in place a 99-year conservation easement.

In 2007, a regional developer expressed interest in the corner, put it under contract, and proposed the 40,000 sq. ft. Creekside Promenade. However, that amount of square feet was well beyond the maximum of 15,000 per quadrant permitted by the Comp Plan. The project was very well designed, with an estimated construction and finish cost of $240 per sq. ft. Anecdotally, several residents from the large surrounding residential area commented that they couldn’t wait for the center to be built so they could “get a gallon of milk without having to drive all the way into town.”

The project generated significant public interest within the community, especially from those residents living directly behind the project and beyond the wooded riparian corridor. The public hearings were held by our Planning Commission over the course of two evenings, with about 130 people in attendance at each meeting.

The residents who attended the meetings, most of whom lived near the site, were universally opposed to the project and very vocal, with the exception of one solitary elderly lady who came forward and voiced her support for the project. I remember her not only for her sole support of the project and for the concepts outlined in the Comp Plan, but especially for her bravery. It had to be tough to be the only person to stand up in a public meeting and openly support a project when 129 of your neighbors were so clearly opposed.

Ultimately, the planning commission recommended the project for approval, with relief to be granted from the maximum square feet allowed by the Comp Plan. The next and final stop on the project’s travelogue was at the City Council, which after experiencing the same multitude of public opposition voted to approve the project — but only in a manner consistent with the Comp Plan. That meant the developer would need to modify his project to show a maximum of 15,000 sq. ft. on his site rather than the requested 40,000. Ultimately, the developer said that he couldn’t make the finances work at that reduced scale, and pulled the project. That was the end of Creekside Promenade.

Upon reflection, there are several lessons learned worth relaying:

First, there were a lot of residents in that part of town who told us they wanted to have better access to neighborhood services, although those living closest to the site fought it vociferously. Clearly, better access to commercial services is an amenity that many people desire, just as long as those services aren’t “too close.”

Second, fear of the new and/or unknown can lead to all sorts of opinions, with some having great validity and others less so, but most of them being informative to some degree. Trying to anticipate those fears and having them addressed in the project or through good communication is important in minimizing the fear that can often be spread when opposition ramps up against a project.

Third, as Wendy points out, clear and early communication from the City with the residents is essential. We wish we would have done more communication with the neighborhood earlier in the process rather than waiting for the formal communication channels to be opened during the rezoning process.

Fourth, the value of the Comp Plan and the consensus that went into it was evident in this case, and whether people agree with the Council’s decision to support the project or not, the Council ultimately saw the Plan as a place of shelter and stability in the midst of a very stormy debate.

Fifth, there were some concerns internally and among the residents that the scale of the project was too large for the location and that it might be a challenge to keep 40,000 sq. ft. adequately leased. Given the recession that immediately followed, in hindsight that concern could have easily turned out to be a major problem — the last thing the neighborhood and the City (and I’m sure the developer) would have wanted would have been empty storefronts.

Finally, good information sharing is critical in ensuring the democratic process is followed and that the public is adequately heard. Consequently, even when there may be disagreement with the final decision, the public will hopefully believe it had all the necessary information, that the process was viewed as fair, and that everyone felt like they had their “day in court.”