Can a Street Be a Place?

This post’s title is the question that was at the heart of a fascinating two-day workshop I attended in April. Sponsored by the Project for Public Spaces, the workshop’s description as covering “Streets as Places” intrigued me.

PPS Executive Vice President Kathy Madden told me to only come if I was also willing to be an active participant. Sounded like fun, and it was. Indeed, the PPS workshop centered around active interaction between the thirty or so attendees. (Next week I’ll talk about our group “walking audit” exercise).

But why think about streets as places? First, streets constitute a surprisingly large amount of the land area within cities, often 30 percent or more. That’s a lot of valuable real estate given over the cars and trucks. Second, what happens on streets directly affects what happens on sidewalks. Third, streets affect quality of life; something most all of us care about.

Here’s some of what PPS has to say about streets: “While streets were once a place where we stopped for conversation and children played, they are now the exclusive domain of cars. Even where sidewalks are present along highways and high-speed streets, they feel inhospitable and out of place.”

For planners and transportation engineers, dealing with streets has long focused on how to move traffic as efficiently and quickly as possible. Other concerns, if considered at all, were secondary. The not too surprising result of this philosophy, as those at PPS succinctly put it, is that “if you plan cities for cars and traffic, you get cars and traffic. If you plan for people and places, you get people and places.”

But there’s one even more overriding concept that PPS President Fred Kent pointed out right at the start of the workshop: “It’s not just the road and sidewalks, it’s the community. Streets are public spaces.” 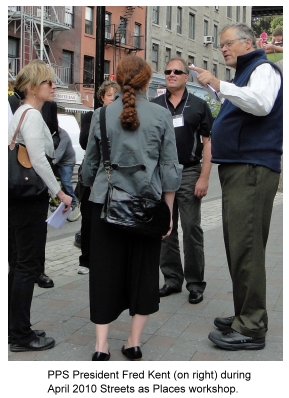 Kent has focused much of his professional life on this theme. A student of William Holly Whyte — who pioneered in researching how people use and interact in public spaces — Kent recounted how one of his first research assignments involved filming a day in the life of a wastebasket on one corner of a midtown Manhattan street. Yes, you read that right. There’s much that can be learned, he noted, through careful observation of how people actually use streets and sidewalks (and even how they interact with trash receptacles). 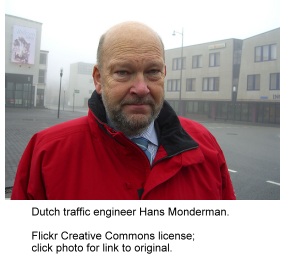 Kent also spoke about the late Dutch traffic engineer Hans Monderman, who developed the idea of “shared streets” (aka “shared spaces”) — that is, streets without traffic lights, stop signs, or lane markings, but where people can walk freely wherever on the street they want to. According to Kent, one of Monderman’s favorite sayings was: “If you want vehicles to behave like they are in a village, build a village.”

Monderman’s research on shared streets found that they do slow down car speeds, as motorists take their time to weave their way down the block. Earlier in his career, Monderman originated the “Woonerf” street which some of you may have heard of (see slides of a Woonerf street in Delft), a precursor of the shared street.

While we may not be ready for shared streets in 21st century America (and the concept is still relatively untested and controversial), the underlying point — that streets should be designed not just for cars, but for people — is highly relevant to our cities and towns today.

In my next post, I’ll tell you how workshop participants spent part of the afternoon circling a square.