Reflections on Portland: Nature in the City & Water

If you visit Portland, take the time to see the Japanese Garden in the city’s west hills. Not only because of its peacefulness, but because walking through there will give you the chance to reflect — on nature, on beauty, and perhaps even on the city you’ve been visiting.

That’s what happened to me, as I looked at the delightful reflections from the ponds and streams in the Garden after being in Portland for a week.

Urban analyst Edward McMahon has written that “a community … nurtures sense of place by understanding and respecting its natural context, such as rivers and streams, hills and forests, native flora and fauna.” — from The Place Making Dividend (Planning Commissioners Journal #80, Fall 2010).

One of the most remarkable things about Portland is the seamless way in which nature is woven into the fabric of the city. As you walk through downtown Portland and its neighborhoods, the natural world is never far away. Of course, there’s the amazing backdrop of Mt. Hood, looming like a towering, immovable cloud on the city’s horizon.

And, closer at hand, the Willamette River — dividing the city east and west. (As a result of this divide, Portland is also known as the “City of Bridges,” thanks to its eleven bridge crossings — with a new one in the works to allow for extension of the MAX light rail line).

In city neighborhoods, you’ll find no shortage of trees.

Many residents have added in lush gardens and plantings that often continue — as you’ll recall from an earlier post — right into the city planting or furnishing strip; that swath of land between the curb and sidewalk. 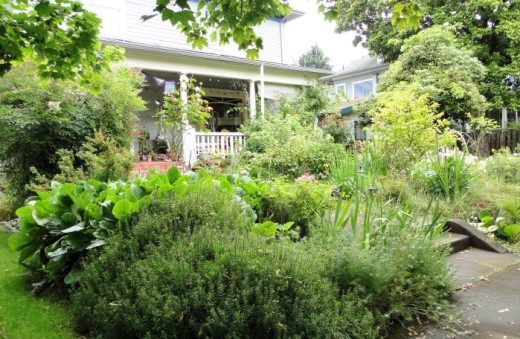 Go downtown and you’ll also find the built environment softened — and made more livable — by tree-lined streets and numerous city parks. While you won’t find a huge “Central Park” right downtown, what Portland has are lots of block size parks — true urban oases. 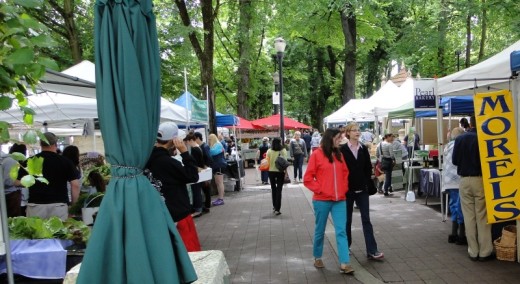 What a wise decision the city’s early leaders made in 1852 when “a year after incorporation, Portland accepted a dedication of a row of twenty-four narrow blocks west of town from developer Daniel Lownsdale.”

While not all the original blocks remain as park land, most do. More details on the Park Blocks’ history can be found in the The Oregon Encyclopedia online — source of the quote in the previous sentence.

Carl Abbott, a long-time urban planning professor at Portland State University, writes in his book Greater Portland: Urban Life and Landscape in the Pacific Northwest, about the balance of nature and commerce in Portland. As Abbott notes, “this careful balance between environmentalism and urbanism [is] one of several creative tensions that have shaped the character of Portland over the past generation.” For a bit of an off-beat, but interesting, interview of Professor Abbott, see I LIVE HERE:PDX – Carl Abbott.

About 35 years ago, the city re-embraced the river’s edge, first by demolishing Harbor Drive, a waterfront urban freeway, and then, in 1978, opening a lengthy riverfront park in its place, while extending bike trails and paths along the rivers edge. The 37-acre Tom McCall Waterfront Park is fittingly named after Oregon’s former governor who helped create the state’s key land use planning laws.

How to deal with water is an issue that’s hard to escape in Portland.

Even during the usually sunny month of June, I ran into four straight days of drizzly rain. Portland averages 155 days each year with measurable rainfall — so I’m sure water is often on Portlanders’ minds, if not on their heads.

Portland has developed a national reputation for its emphasis on using “natural systems” for dealing with storm water runoff. You might recall my mention of how Tanner Springs Park welcomes runoff onto its site. But in walking around the city, I spotted many examples of plantings designed to not just capture runoff, but add some beauty.

You can find articles online about Portland’s approach. See, for example, the City Bureau of Environmental Services’ Sustainable Stormwater Management page and its sidebar links.

You’ll also find water in many downtown Portland parks — in the form of fountains, often with areas for kids to play and splash in. See, for example, my prior posts about the central role water plays in Tanner Springs Park and Jamison Square.

The South Park Blocks, which I mentioned earlier in this post, were also recently extended with a new park block, called “Director Park” (officially Simon and Helen Director Park). It also features a delightful fountain and water play area. See the video below.

The Portland Water Bureau has even prepared a self-guided walking tour of Portland’s municipal fountains. Take a look at their colorful brochure.