The Future Belongs to Walkable Communities

Ewing, who recently joined the faculty at the University of Utah’s City and Metropolitan Planning program, has long focused his research and writing on land use and transportation issues. His career’s included stints as Director of the Voorhees Transportation Center at Rutgers University and as a research professor at the National Center for Smart Growth. Interestingly, he’s also squeezed in two terms in the Arizona state legislature.

Ewing noted that walking is the second most used mode of transportation after the automobile. In the U.S. today, he said, 86% of all trips are by car, followed by 9% on foot, and only 2% by transit. What’s more, when people are surveyed they invariably indicate they would like to be able to walk more. Yet land development patterns and current housing choices, Ewing argued, often put roadblocks in the way of increased walking.

Another key factor in PODs or TODs is good design. Among the design principles Ewing pointed to is shorter blocks. “Block size is really important, and the shorter the block, the more walkable a community will be.” As density increases it is also essential, he said, to provide ample public spaces, such as parks and plazas, “as a relief so it doesn’t feel as crowded.” 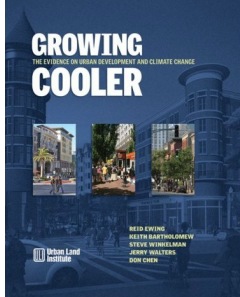 Ewing acknowledged that there’s no hard data on the percentage of new development that would be considered pedestrian-oriented, though he said a ballpark figure would be between 3 and 5 percent. For Ewing, part of the problem is that “the development industry is still building for an outdated market, one that existed twenty years ago.” Ewing does, however, see signs of change, especially in the increased consumer demand “for smaller lot single-family homes.”

Two other obstacles cited by Ewing: older land development codes which prohibit the higher densities and smaller lot sizes needed to support PODs or TODs, and “subsidies for automobile use” — especially through what he said is the over generous supply of parking. On this last point Ewing noted that “the less parking provided the more likely people will walk or use transit.”