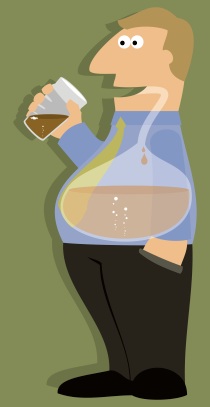 We love maps — and are happy to see that the Web seems to be proliferating with fans of geography and cartography.

So, maybe it shouldn’t come as a surprise that you can map the geographic distribution of bars. And that’s just what the professional geographers at FloatingSheep.org have done. Take a look at their recent post, The Beer Belly of America. Here’s some of what they have to say about what the data shows:

“We were quite surprised when we did a simple comparison between grocery stores and bars to discover a remarkable geographically phenomenon. We had expected that grocery stores would outnumber bars and for most parts of North America that is the case. But we could also clearly see the “beer belly of America” peeking out through the “t-shirt of data.” Starting in Illinois, the beer belly expands up into Wisconsin and first spreads westward through Iowa/Minnesota and then engulfs Nebraska, and the Dakotas before petering out (like a pair of love handles) in Wyoming and Montana.

The clustering was so apparent that we wanted to check how it compared to the “official” data on this activity. So we gathered 2007 Census County Business Pattern on the number of establishments listed in NACIS code 722410 (Drinking places -alcoholic beverages-) and divided by Census estimates for state population totals for 2009 and found remarkable correspondence with our data.

On average there are 1.52 bars for every 10,000 people in the U.S. but the states that make up the beer belly of America are highly skewed from this average.”

From a table they include, it looks like the winners are North Dakotans, with 6.54 bars per 10,000 very cold people — at least in February! (Well, maybe we found the explanation).

Take a look at some of the other equally offbeat maps on FloatingSheep — and see also Doug Greenfield’s fascinating Map of the Week site.